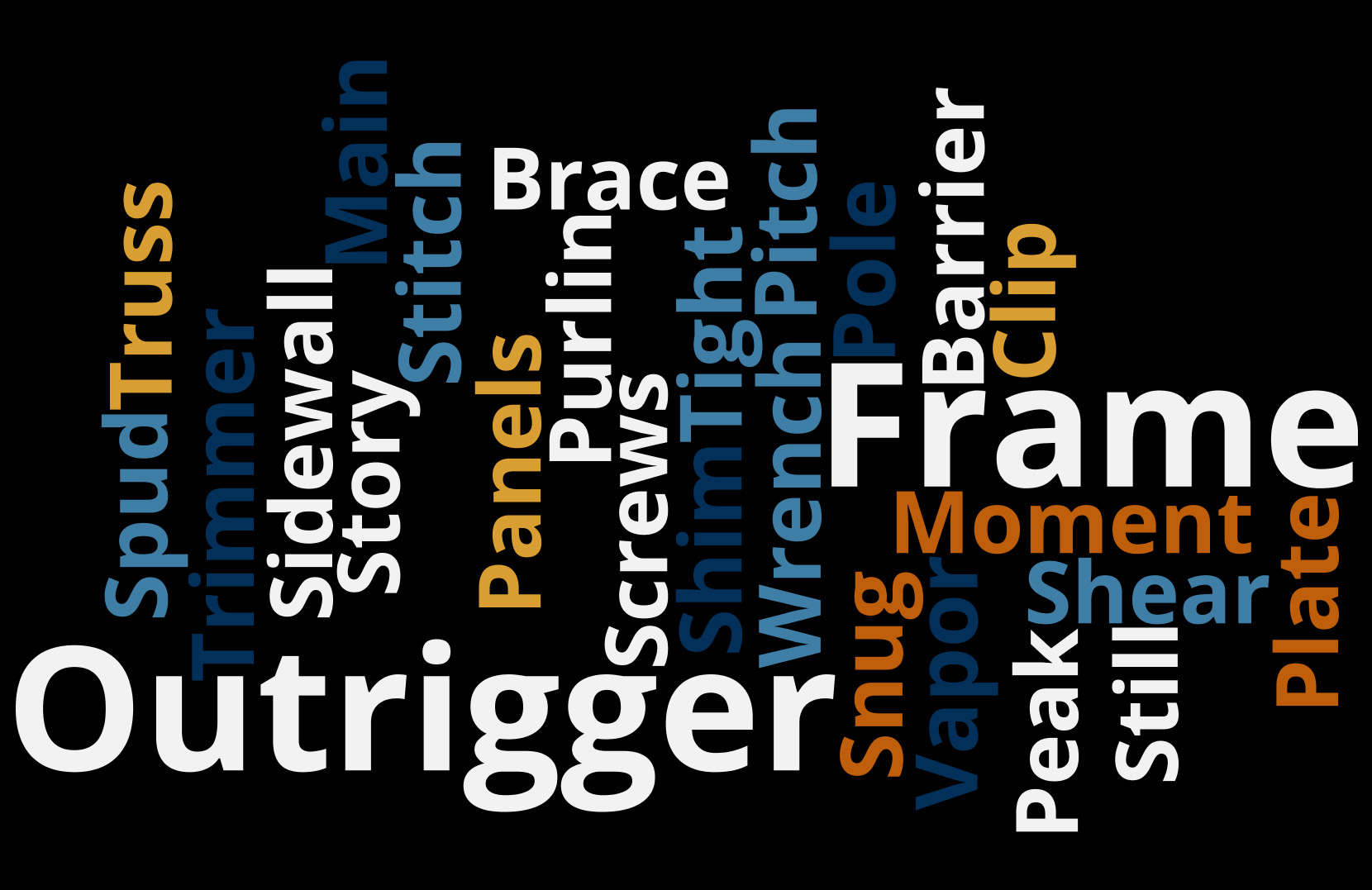 Web Steel Buildings NW LLC wants to be sure our customers always have the information they need. One area that we have found to be helpful to our new steel building customers is a glossary of terms. Having access to the definition to many of these terms can help you in successfully communicating what you want in your new steel building. If you would like to review a listing of some of these more common terms, please select here:

Anchor Bolt
An A-307 steel bolt embedded in the concrete footing to anchor the base plate of the frame leg.

Angle
A steel member bent at 90 degrees, which usually has holes drilled through that allow for braces or bolts to pass through. The terms Angle Steel or Angle Bracket are sometimes used.

Base Plate
A plate attached to the bottom of columns and frames which rests on a foundation or other support, usually secured by anchor bolts.

Blocking
Dimensional lumber nailed in place between girts and purlins as additional reinforcement, support, or closure.

CCB
Condensation Control Blanket. A blanket style insulation with fiberglass on one side and vapor barrier facing on the other (generally white) designed specifically for metal buildings.

Centerline
A reference line showing the center of a component and/or assembly.

Chord
The angle members that run parallel to the slope of the roof in the vaulted truss. The chord on top is called the Upper Chord, and the one below is called the Lower Chord.

Cladding
The exterior metal roof and wall paneling of a Metal Building System.

Clip
A flat steel plate with multiple holes, welded to the truss leg or span. Used as the attachment point for girts and purlins. For more information, see Girt Clip and Purlin Clip.

Closure Strip
A resilient foam strip, formed to the contour of ribbed panels and used to close openings created by ribbed panels joining other components.

Column
A mainframe member used in a vertical position on a building to transfer loads from main roof beams, trusses, or rafters to the foundation.

Corner Column
A steel member, usually a tube, at the corner of the building, which holds both sidewall girts and endwall girts. It has Corner Clips welded to it.

Crown
The bend of a board as it stands on edge.

Drift Pin
A tapered pin used during erection to align holes in steel members to be connected by bolting. See spud wrench.

Dunnage
Material used to buffer the building supplies against shifting and breakage during transport.

Eave
The line along the sidewall formed by the intersection of the planes of the roof and wall.

Eave Height
The vertical dimension from finished floor to the eave.

Eave Strut
A structural member located at the eave of a building which supports roof and wall paneling.

Edge Purlin
The final purlin at the lowest point of the roof. The edge purlin is parallel to the walls of the building, rather than perpendicular to the roof like the other purlins.

End Bay
The bays adjacent to the endwalls of a building.

End Frame
A frame located at the endwall of a building which supports the loads from a portion of the end bay.

Endwall
Exterior wall which is parallel to the interior main frame of the building.

Endwall Column
A vertical member located at the endwall of a building which supports the girts. In beam and column end frames, endwall columns also support the beam.

Extended Eaves
The projection of the roof beyond the plane of the endwall or sidewall.

Frame
The crisscrossing network of angle braces that supports the building. The WSBNW vaulted frame is comprised of four sections; two (2) trusses, and two (2) frame legs.

Frame Legs
The legs on which the truss span is supported. Secured to the concrete footings with headed anchor bolts.

Gable
The triangular portion of the endwall from the level of the eave to the ridge, or “peak”, of the roof.

Girt
A horizontal structural member that is attached to frame legs and endwall columns and supports paneling.

Girt Brace
A length of angle steel which bolts to the frame leg or endwall column at a predetermined point and is secured to the bottom of the corresponding girt to provide stabilization for that leg or column.

Header
The horizontal framing member located at the top of a framed opening.

Jamb
The vertical framing members located at the sides of an opening. Also known as a “trimmer”.

Jamb Stud
The piece of 2×6 (2×8 in rare cases) dimensional lumber to which the holdown fixtures of a shearwall panel are attached.

Longitudinal
The direction parallel to the ridge or sidewall.

Main Frame
An assemblage of rafters and columns that support the secondary framing members and transfer loads directly to the foundation.

Moment Frame
A rigid frame so designed that it offers rigidity and stability in its plane. Generally used to resist longitudinal loads where other methods are not permitted. Used in lieu of X-bracing and shear walls.

Outrigger
One of many members for buildings with extended eaves that extends parallel to the Endwalls off the Frame Trusses and C-Channels to the length of the extended eaves.

Outrigger Clip
One of two purlin clips welded at the edges of rafters and frame trusses. These are part of the vaulted building when it has extended eaves, and allows the purlins to be attached at a perpendicular angle to the rest of the purlins. For more information on how this works, see sheets S4 and S5, and section 5 of this manual.

Panels
The ‘skin’ of the building. The metal parts made of cold rolled steel with ribs for rigidity and strength. Comes in various colors, thickness and profiles. See ‘cladding’.

Pitch
The description of the slope of the roof expressed in inches-of-rise per length-of-run. A 3:12 pitch equals 3 inches of height per 12 inches of length.

Plumb Cut
A cut made perpendicular to the horizontal plane.

Purlin
A horizontal structural member which supports roof covering, attached to the top chord of the trusses and the endwall rafters.

Purlin Brace
A length of angle steel which bolts to the frame truss at a predetermined point and is secured to the downhill side of the corresponding purlin to provide stabilization for that half span. Usually only one side of the truss needs a brace, but sometimes two are required. Check sheets N2 and 7 for details.

Purlin Fascia
The piece of 2x equal to the width of the purlins and which is attached to the ends of the purlins. On a building with extended eaves the gable trim combination covers the fascia.

Rafter
A C-Channel member in the endwall, which bolts into the corner column and the endwall columns. Sometimes referred to as Endwall Rafter.

Rib
The longitudinal raised profile of a panel that provides much of the panel’s bending strength.

Sealant
Any material which is used to seal cracks, joints or laps.

Self-Drilling
A type of screw used to attach one steel component to another, e.g., steel purlins to steel clips, or roofing to steel purlins.

Shear
The force tending to make two contacting parts slide upon each other in opposite directions parallel to their plane of contact.

Shear Panel
A structural assembly, usually made with a plywood face, which provides for the overall stability of the building and receives wind loads from more than one surface; a lateral load resisting wall in lieu of x-bracing.

Shim
A piece of steel or wood used to level base plates or align columns or beams.

Sidewall
An exterior wall which is perpendicular to the frames of a building.

Sill Plate
Pressure treated lumber (because of its contact with the slab) used essentially as the bottom girt.

Slab
Concrete poured monolithically (all at one time) with a footing to provide the floor and the foundation support for the building.

Snug Tight
The tightness of a bolt in a connection that exists when all plies in a joint are in firm contact.

Stitch Screws
Screws used to secure metal to metal. Typically used to attach ridge cap and other trim pieces to the panels.

Story Pole
A builder made spacing device, used to keep the girts parallel during assembly, particularly while applying the sidewall panels.

Swarf
The steel debris created by using friction saws, abrasive discs, drills and the like on steel roof and wall products. If left on the surface of coated steel, swarf will corrode the steel and cause rust stains.

Through-Fastened Roof System
One in which the roof panels are attached directly to the roof substructure (purlins) with fasteners which penetrate the roof sheets and into the substructure.

Transverse
The direction parallel to the main frames.

Trim
The light gauge metal used in the finish of a building, especially around openings and surface intersections. Often referred to as flashing.

Truss
A rigid framework for supporting a roof. Top half of the vaulted frame.

Turn-of-the-Nut-Method
A method for pre-tensioning high-strength bolts. The nut is turned from ‘Snug tight’ position, corresponding to a few blows of an impact wrench or the full effort of a man using an ordinary spud wrench, the amount of rotation required being a function of the bolt diameter and length. See page 4-8 for further details.

Vapor Barrier
One of the many different materials which lay over the purlins and under the roof panels and designed to decrease the sweating effect caused by temperature differentials from outside to the inside of the building.

Wood Grip Screws
A hex-head screw with a neoprene washer used to attach siding and roofing panels to the girts and purlins.

X-Brace
Cable bracing used in the plane of the roof and walls to transfer loads. Applied in a ‘crisscross’ manner across the width of the bay. 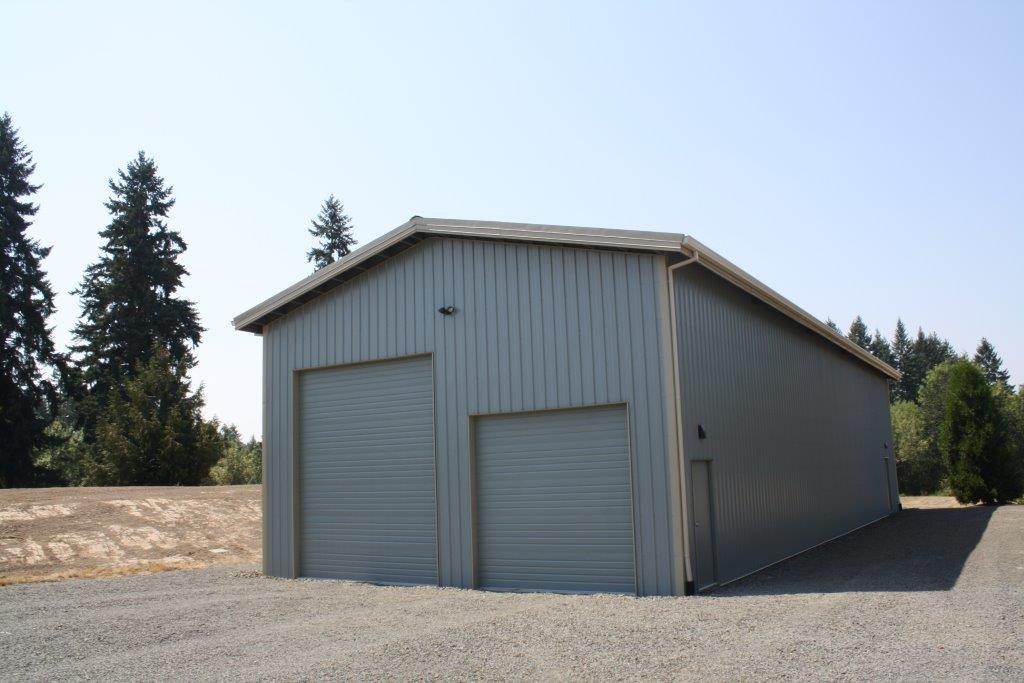 Sales of shops and garages for residential sites continue to grow.

Sales of shops and garages for residential sites continue to grow. It's fun working with… 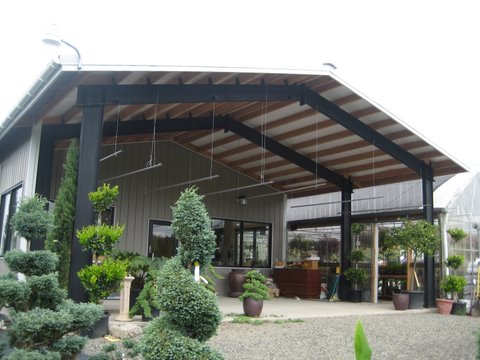 What is Swarf and what to do about it

Swarf is the steel debris created by using friction saws, abrasive discs, drills and other…

Lease to own your building!